Announcement #1 Not a Campaign Setting

I was asked some questions for a interview recently about the City of Vermilion, which I'll put in a update when it goes live. But I wanted to try and give a clearer explanation of what this project is all about. I do NOT view this as a campaign setting. If that is what you are hoping this project is, you may be disappointed. I do have enough fluff for a GM to work with, but I don't go into pages and pages of detail.  Instead, I view this as more as a Book of Lairs...I'm focusing on the adventure aspects. I went up to Appendix R--each appendix is a dungeon/adventure to explore. The city is like a web, with all these different adventure/options that the party may choose to explore or stumble upon and most are connected. Or they can easily be taken out completely of Vermilion and dropped into your own campaign.

I just added on to my map program and have been messing around with it. I decided to redo the city map. I’m throwing up a comparison of the two maps, the bottom one is the new one I just created (super rough draft and unfinished). I think it looks better so far, but still have lots to do on it. I didn't care for the buildings being so separated on the first map--I wanted them closer. The map is the main area of the city where all the city adventures take place. This is also a zoomed in version…the full map has the full city that provides room for GM’s to insert their own city adventures and/or for me to expand on later. The three gates on the walls in the bottom map lead to more city. Further adventure ideas will be included at the end. 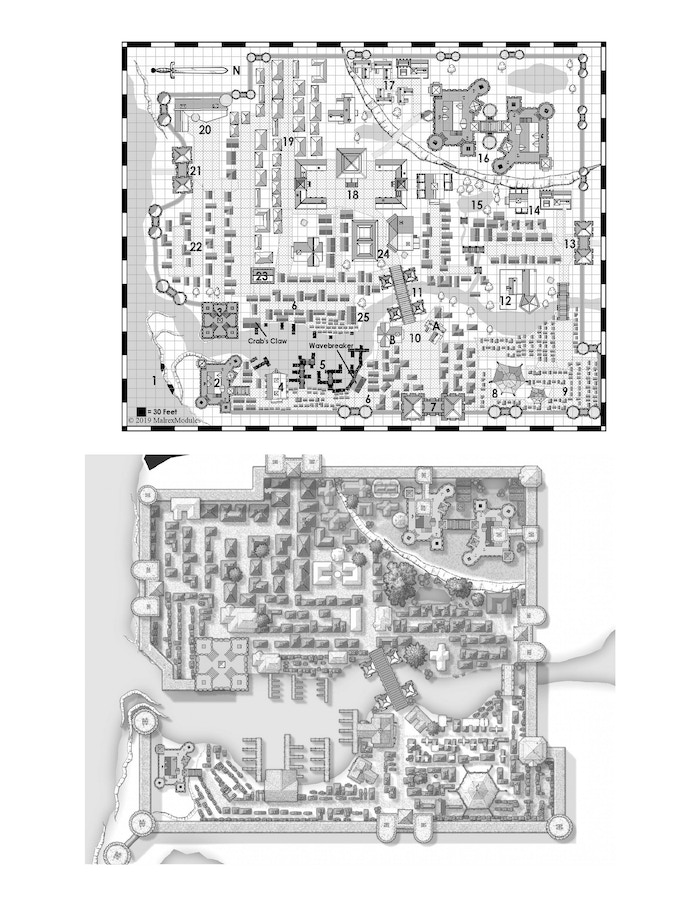 During layout, I’m considering a ‘zoomed in’ map area with a grid. So when I’m describing areas in the city, like Hefner’s Hovel or Twilight’s Embrace, it will be on the same page as the description and you will be able to see all the alleys and details in that area on the map. This will beef up the page numbers of the book, but can give a clearer picture of what things look like in case the party is fighting in the alleys or rooftops. I’m going to play around with the idea during layout and go with what makes the most sense, so if anyone has strong opinions about it, feel free to shout em out.

Announcement #3 On Downtime and Demesnes

I want to give a shout out to Courtney Campbell’s “On Downtime and Demesnes”. His Kickstarter only has 2 days left and looks pretty sweet (I backed it). It’s pretty darn close to another stretch goal as well, last time I checked. Check it out here. I plan to work with Courtney on some of the art pieces in Vermilion. This art piece he did for me shows what adventurers may discover if they journey underwater towards the Maelstrom.