54 backers….24% funded….26 days to go. I’m pleased with the results so far!! But I need to get out of this social media bath and talk about design or something or I’m going to go insane.

I don’t know about you, but city adventures always intimidated me to run for a group. There is so many personalities and NPC’s to keep track of and it was hard to prepare as the party could go anywhere at anytime. It’s not like in a dungeon where the players still had choices, but the walls would at least narrow the options and put GMing on cruise control. In a wilderness, the party can travel anywhere too, but I had an easier time throwing in a cave or, at least most times, the party would stick together. But in a city, characters can split up very easily, running errands, getting healed, selling goods, buying supplies, and going into numerous shops with various NPC’s. How do you prepare for all that? And...doing all that doesn’t really classify as a ‘city adventure’ in my book, that’s just maintenance. 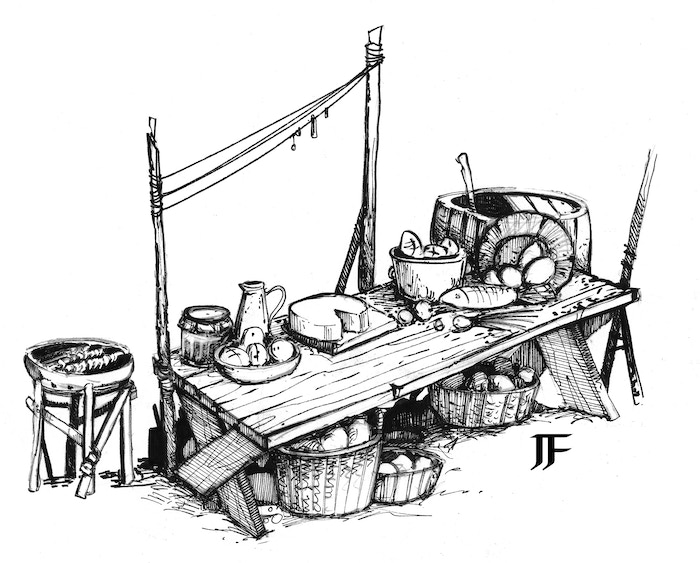 With City of Vermilion, I wanted to explore urban adventures. What makes good urban adventures?...and how do I keep the player’s attention on what I prepared? With my GMing style...I couldn’t. I’m more sandbox style...I like supplying the party with adventure hooks and options.  Instead of me trying to get the party to go where I wanted, I wanted them to show me where they wanted to go. But I also needed a way to make ‘walls’ so that I didn’t have to prepare 20+ pages of material every night.

Through play-testing, I found the ‘walls’ I needed would be created by the players themselves! I had so many rumors, events, situations, and a timetable that I could throw at the party, that the players became overwhelmed with choices. They argued with themselves to remain focused on the task at hand and not be distracted!!! So then it was all easy...I knew what they wanted to do, and I kept throwing up distractions once in awhile, but most of the times they focused on what they wanted to do, which made the intimidating city as easy to run as a dungeon for me. And that is what you will find with the City of Vermilion...all the hooks, situations, events—lead to fleshed out areas that are easy to scan DURING play, so it doesn’t matter which direction the party chooses...you’ll be ready!

We got several days of waiting here, so if interested, let’s get a discussion going. What are your experiences like running a urban/city adventure? What are your favorite aspects of a city?